Throughout its history, Richland County has produced or been the home to a wide variety of individuals that have made important contributions to the world. 1812Blockhouse has been sharing their stories in a series called “Richland Roots.”

During the American Civil War, Ohio and Richland County contributed greatly to the Union cause. We have previously posted stories about soldiers such as General Robert Byington Mitchell, a native Mansfielder. Today we turn our attention to another Mansfield resident who saw service in the Union Army, albeit with a unique twist – Thomas H. Ford.

Ford was born in Virginia in 1814 and had little education before moving to Mansfield. At some point he did take up the study of law, and was admitted to the Ohio and Richland County bar. He then served in the Mexican American War with the rank of captain. 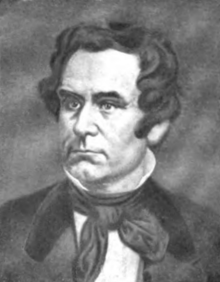 Ford became a strong anti-slavery leader and an early leader in what was to become the Republican Party. After delivering a rousing speed in Philadelphia, he was offered the Republican nomination for Lieutenant Governor of Ohio and won election on the same ticket that saw Salmon P. Chase become the state’s first Republican governor. He served for one term.

By 1860, he had changed occupations, and is listed in the census that year as a “Printer.” That same year, he was selected as a “government printer” by the United States House of Representatives.

Captured again by a sense of patriotism, Ford helped to assemble what was to become the 32nd Ohio Volunteer Infantry, organized in Mansfield under his command. The 32nd began its career with a flourish, involved in several engagements heading into 1862. At the Battle of Harper’s Ferry, however, which took place in September of that year, things took a turn.

On the morning of the second day of the battle, Ford was taken ill and placed an inexperienced officer in command of four regiments. After a steady fight, Ford returned to command and issued an order of retreat. Only half of the men heard the order, however, and over 12,000 men and officers were captured by the Confederate Army.

In a quickly assembled War Commission, it was found that Ford had acted improperly, and a recommendation was made for dismissal from his post and from the Army. President Lincoln issued that order.

Almost immediately, Thomas Ford set about to correct the record. In a letter to Major General Cassius Clay dated November 19, 1862 and which now forms part of the papers of President Lincoln, Ford shared the following words: ““The testimony will show that I did my duty faithfully and fully. I want this disgrace wiped out…”

And, if the subsequent years are any guide, that did happen to some extent. Thomas Ford launched a law practice in Washington D.C. and also returned to work as a government printer. There is some evidence that he remained in close touch with President Lincoln and also with his successor, President Andrew Johnson. He was actually offered the position of United States Ambassador to Ecuador but declined the opportunity.

Thomas H. Ford lived only a few more years, dying unexpectedly in February 1868 after addressing a crowd for over an hour. As another testament to the high regard in which he was held despite his war record, one of his pallbearers at his Washington D.C. funeral was his former Mansfielder, John Sherman.

Ford was returned to Mansfield for burial. He lies in Mansfield Cemetery alongside his wife, Mary.

A Full Weekend Of Racing Ahead At Mid-Ohio

Let’s Root For The Mansfield Independents This Summer

Dinner With A View

No Better Time To Try Out The Ohio Road Trip Collection

How Ohio Plans To Use Rescue Plan Education Dollars

When Richland Welcomed: The Father Of Hungarian Democracy