NOTE: This post in our “When Mansfield Welcomed” series has been updated with recently-discovered information.

It was a brilliant Saturday in July, 1896 when Buffalo Bill came to town. Not just Buffalo Bill, mind you – his famous “Wild West Show” was in tow and put on two performances in a lot on East Fourth Street. This was not his first visit to Mansfield, nor would it be his last.

Buffalo Bill, born William Frederick Cody in 1846, grew up on the frontier and loved every aspect of that way of life. As he grew older, some of the titles he earned, or at least ascribed to himself, including buffalo hunter, U.S. Army scout and guide, and showman, as well as Pony Express Rider, Indian fighter, and even author. Whatever Cody’s titles, he was destined for fame.

Cody’s Wild West Shows ran from 1883 through 1913, some four years before his death. The shows consisted of reenactments of history, such as the Battle of the Little Big Horn, followed by displays of showmanship, sharpshooting, hunts, racing, and rodeo style events. Each show was three to four hours long, and would attract thousands of people. 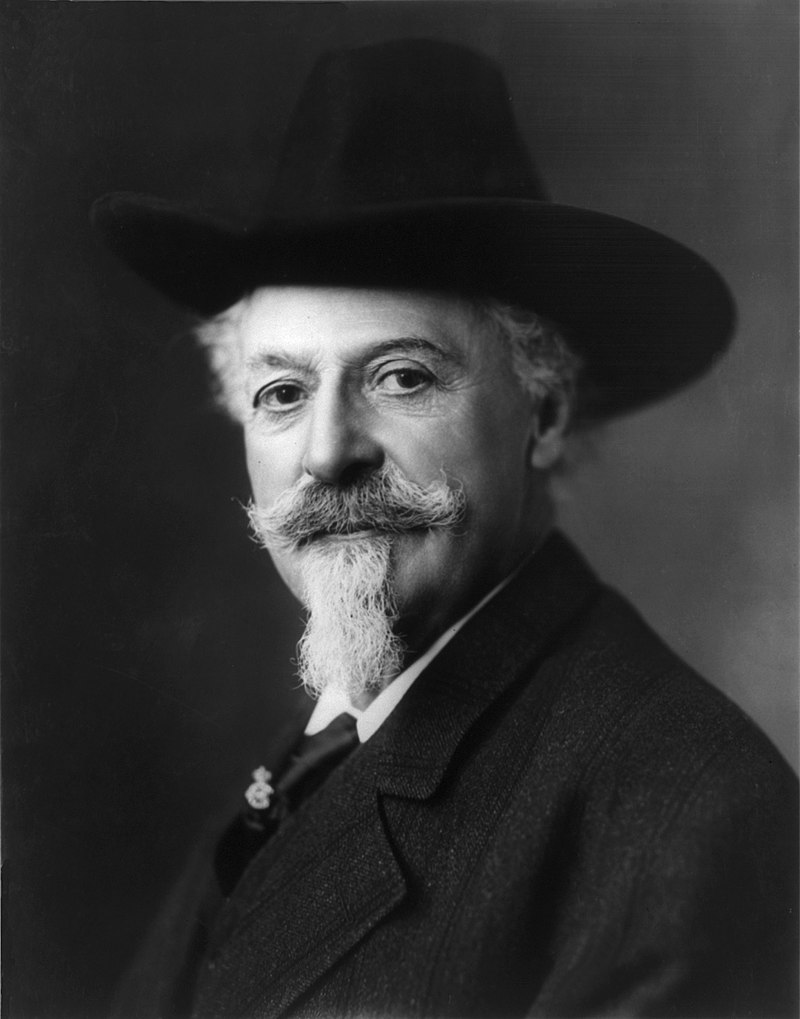 Such was the case in Mansfield, where the day started when some 54 large railroad cars unloaded and tents pitched at the “foot of East Third Street.” According to the Show’s official log book, the group arrived at 6:00 AM and had a one mile haul to the lot, which they found to be “in good condition, large and roomy.”

That morning, one part of the Show traveled to downtown Mansfield for the parade, while the other remained at the encampment to wash wagons (the Manager felt that as Columbus was the next stop, they should look “a little decent”). The show was classic Wild West Show, with Buffalo Bill riding in a carriage pulled by two white horses, followed by various tribes of Native Americans; English, French, and German cavalrymen; and several other participants from South America, Latin America, Eastern Europe, and the Middle East.

Cowboy Will Smith received a bad fall to-day but fortunately received no serious injury. Business at both performances big.

The first appearance of Buffalo Bill in Mansfield took place in 1874, when he came with his combination acting troupe. On that occasion he was joined by Wild Bill Hickock and others.

Buffalo Bill’s next visit to two took place on August 1, 1899. On this occasion, the weather was clear although the lot was “very soft.” The show set up in the same location, “Third and Ashland Streets,” and the afternoon attendance was “very big.” His last time performing in Richland County was on July 6. 1911.

Richland Roots: An Apollo Astronaut With A Mansfield Connection

A Full Weekend Of Racing Ahead At Mid-Ohio

Let’s Root For The Mansfield Independents This Summer

Dinner With A View

No Better Time To Try Out The Ohio Road Trip Collection

How Ohio Plans To Use Rescue Plan Education Dollars

When Richland Welcomed: The Father Of Hungarian Democracy